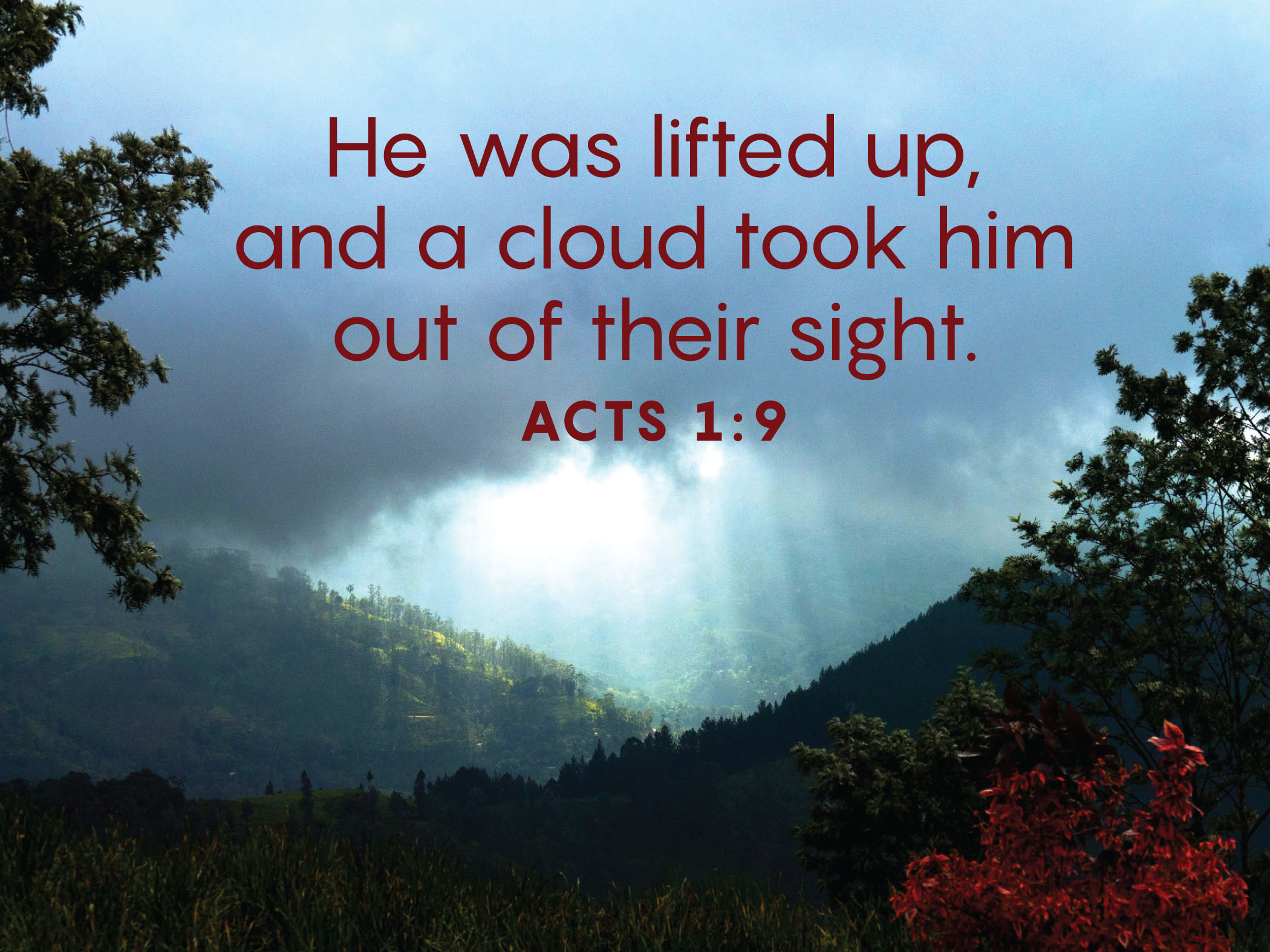 Christ is risen! He is risen indeed!

This is the last Sunday in the Easter season and today we celebrate the Ascension of our Lord. Jesus rose from the dead on Easter Sunday and 40 days later ascended into heaven and during that time, Acts 1:3 (ESV) 3 …he presented himself alive after his suffering by many proofs, appearing to them during forty days and speaking about the kingdom of God.  And at the end of the forty day, Acts 1:9 (ESV) 9 ,,,when he had said these things, as they were looking on, he was lifted up, and a cloud took him out of their sight.[1]

This is a big part of what we confess in the second article of the Apostles’ Creed.  We confess that Jesus:

1. Was conceived by the Holy Spirit, born of the Virgin Mary. This is the Incarnation, the Word made flesh to dwell among us. We celebrate the Incarnation in the Christmas season.

2. We confess He suffered under the power of Pontius Pilate, was crucified, died, and was buried; He descended into hell; On the third day He rose from the dead. We remember the passion and death of Jesus Christ during Holy Week and His glorious resurrection on Easter Sunday.

3. We confess He ascended into heaven and is seated at the right hand of God the Father almighty: and from thence He will come to judge the living and the dead.  This we celebrate today; Jesus’ ascension.

Ascension is 40 days after the Sunday of the Resurrection, so it falls on a Thursday.  We get off work for Christmas, and Easter is always on a Sunday but in this country we don’t get a day off on Ascension.  In some countries, like Germany, Ascension Thursday is a day off, but not here; it is just another Thursday.  Therefore, we celebrate Ascension on Sunday.

Most of the world ignores the Ascension, but it is an important event that we should remember and celebrate, because in the Ascension we find the promises of the Lord.  Jesus prophesied His death and resurrection before they occurred, but the disciples did not understand that he needed to suffer in order to have victory in the resurrection. Also the Lord told them that after the resurrection, He would return to the Father, but they did not understand why He could not stay with them in a visible form. Acts 1:6 (ESV) 6 So when they had come together, they asked him, “Lord, will you at this time restore the kingdom to Israel?”[2] They thought He was ready to defeat the Romans, take control, and reign from the throne in Jerusalem.

But Jesus’ throne is not an earthly throne.  The kingdoms of this world rise and fall, but the kingdom of God will last forever. For the Descendant of David to reign forever, as God promised, He had to ascend to the throne of God.  With His birth in Bethlehem began the humiliation of the Son of God, when He left his throne to live among us and to fulfill the Law of God in our place.  He suffered the punishment of our sins on the cross. Death was the last stage of Jesus’ humiliation, and it was also His victory. In the resurrection Jesus was exalted, but the exaltation was not complete until His return to the Father in His human nature exalted by His divine nature.

1 Thessalonians 4:16-17 (ESV) 16 …the Lord himself will descend from heaven with a cry of command, with the voice of an archangel, and with the sound of the trumpet of God. And the dead in Christ will rise first. 17 Then we who are alive, who are left, will be caught up together with them in the clouds to meet the Lord in the air, and so we will always be with the Lord.[3]

In addition, we have the promise of the second coming of the Lord. Acts 1:10-11 (ESV) 10 And while they were gazing into heaven as he went, behold, two men stood by them in white robes, 11 and said, “Men of Galilee, why do you stand looking into heaven? This Jesus, who was taken up from you into heaven, will come in the same way as you saw him go into heaven.” [4]

Today we have another promise. Jesus told them before his ascension: Acts 1:7-8 (ESV) 7 … “It is not for you to know times or seasons that the Father has fixed by his own authority. 8 But you will receive power when the Holy Spirit has come upon you, and you will be my witnesses in Jerusalem and in all Judea and Samaria, and to the end of the earth.”[5]  Jesus was leaving them but he was sending the promised Holy Spirit.

Next Sunday we will celebrate the day of Pentecost. Ten days after the Ascension, according to the Lord’s promise, the Holy Spirit was poured out upon the church. After visible and audible manifestations of the presence of the Holy Spirit, St. Peter preached and three thousand people were baptized. That is, three thousand received the gift of faith by the power of the Holy Spirit and holy baptism. And every person we baptize receives this same gift, because Christ was raised up beside God the Father almighty to send the Holy Spirit to His church.

Therefore, beware lest you imagine within yourself that he has gone, and now is, far away from us. The very opposite is true: While he was on earth, he was far away from us; now he is very near. . .

There are still more. Before His ascension, Christ told his disciples, “I am with you to the end of the age” (Matthew 28:20) and also promised them where there are two or three gathered in His name, He would be among them (Matthew 18:20).

There is a wonderful passage from an Ascension sermon preached by Martin Luther in 1523.  :We must, therefore, conceive of [Jesus’] ascension and Lordship as something active, energetic and continuous, and must not imagine that he sits above while we hold the reins of government down here. Nay, he ascended up to heaven for the reason that there he can best do his work and exercise dominion. Had he remained upon earth in visible form, before the people, he could not have functioned so effectively, for all the people could not have been with him and heard him. Therefore, he inaugurated an expedient which made it possible for him to be in touch with all and reign in all, to preach to all and be heard by all, and to be with all. Therefore, beware lest you imagine within yourself that he has gone, and now is, far away from us. The very opposite is true: While he was on earth, he was far away from us; now he is very near. . .[6]

In what way is Jesus near?  In what way is Jesus with us?  In His body and blood in the sacrament.  Because in His human body He ascended into the heavens, He is free from the limits of space and time, and His body and blood can be present among the faithful in many places at the same time.  We remember Ascension as the culmination of Christ’s mission in this world.  Now His mission is the mission of the Church.  As a man in visible form, Jesus could only appear in one place at the same time. Because Christ is now among His church anywhere at any time, and the church has the guidance of the Holy Spirit, there are no limits to the proclamation of the gospel.  Jesus ascended so He could send the Holy Spirit who testifies to Jesus.  In this, we have faith and hope and peace that surpass all understanding. Amen.