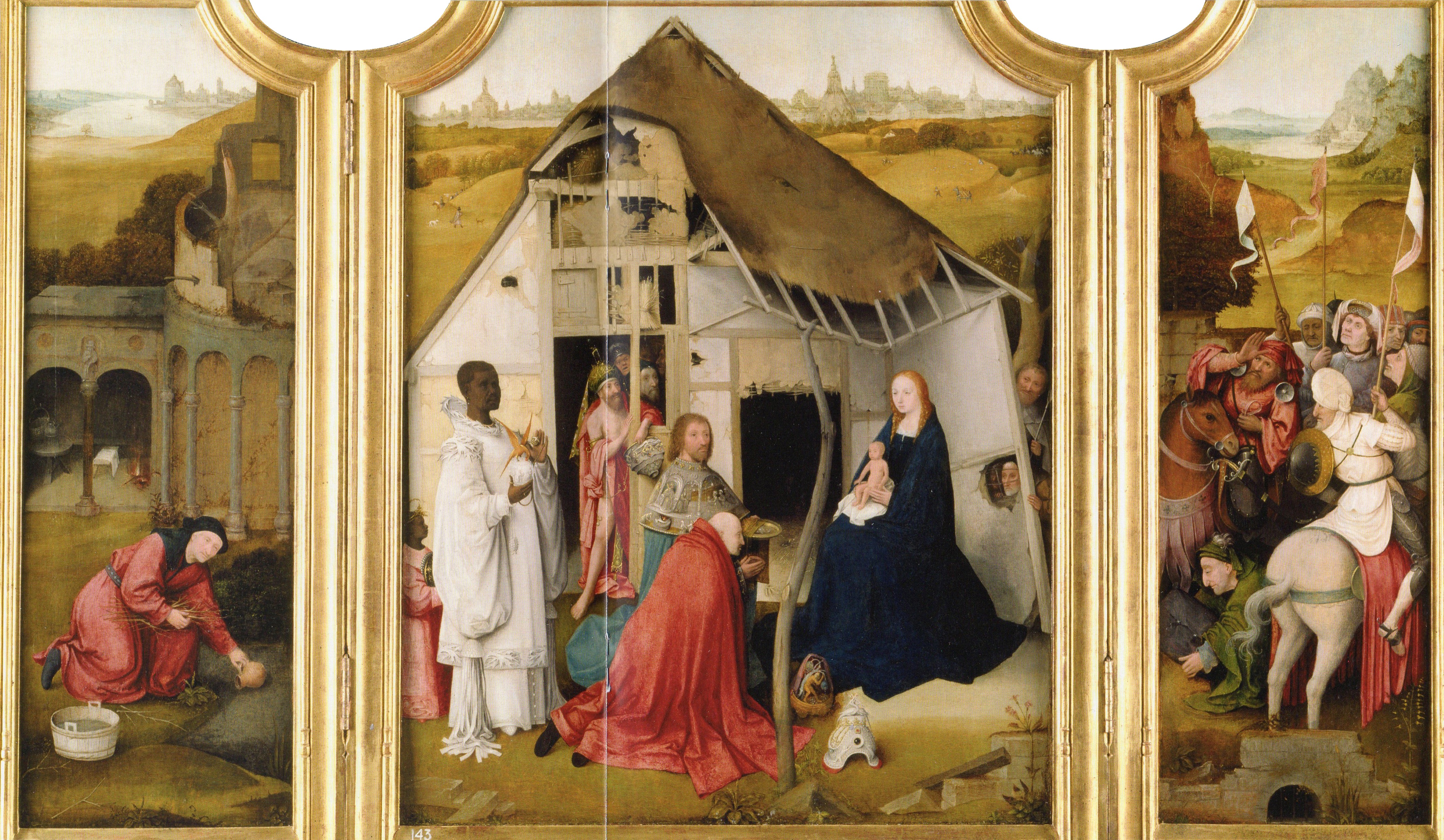 Today we celebrate Epiphany a day early.  The visit of the Magi to the infant Jesus in Bethlehem which on January 6 marks the end of the 12 days of Christmas.

There are three mysteries in the story of the Magi. First, what was the star? What was this star which guided the Magi to Bethlehem? There are several theories to explain the star of Bethlehem as a natural phenomenon. Some people say that the star was a comet or meteor, because the text implies movement. Matthew 2:9 (ESV) 9 … And behold, the star that they had seen when it rose went before them until it came to rest over the place where the child was.[1]  But as a meteor or comet, this does not make any sense because this is not how comets and meteors behave.  They move quickly and do not stop over a place on earth.

Perhaps one of the best theories is that of Johann Kepler, a seventeenth-century German astronomer. Kepler was a Lutheran, who once studied to be a pastor. In his work as an astronomer, Kepler found evidence to promote the ideas of Nicholas Copernicus, who proposed the earth, the moon and other planets revolve around the sun, not the sun, the moon and the planets revolving around the earth. Regarding the star of Bethlehem, Kepler proposed that it was an alignment of Jupiter and Saturn in the year of Jesus’ birth, to form a bright light in the heavens. According to the symbolism of the ancient Middle East, Jupiter, the greatest of the planets, was the king of the planets. Saturn was linked with the Jews. Therefore, the alignment indicated the birth of the promised King of the Jews, that is, the Messiah.

Another alternative is that the star was indeed a miracle of God,  God can use natural phenomena, but He can also suspend natural laws. What we do know from God’s Holy Scripture is that there was a star that guided the Magi to Jesus.

The second mystery is the Magi, the Wise Men.  Who were they? What were they?  Only the Gospel according to St. Matthew speaks of the Magi.  Matthew 2:1 (ESV) 1 Now after Jesus was born in Bethlehem of Judea in the days of Herod the king, behold, wise men from the east came to Jerusalem,[2]  In the pictures of Christmas, there are always three Magi, because there were three gifts; gold, frankincense and myrrh. But in the text we do not find a specific number. The word, “magician”, is from the root of this word, Magi, which came to mean wise man. In the beginning, the Magi were a caste of priests in Persia and Mesopotamia who were also students of the stars and medicine. In time they became advisors to the kings of Persia and Mesopotamia, the countries to the east of Israel in the areas known today as Iran and Iraq.

We find the word for Magi in the second chapter of the book of the prophet Daniel. After Daniel interprets King Nebuchadnezzar’s dream, the king made him governor of the whole province of Babylon, and prince of the governors over all the wise men, the magi of Babylon. Because of Daniel and the captivity of the Jews in Babylon, the Magi knew something of the messianic prophecies of the Old Testament, and therefore, traveled to Bethlehem to worship the Child Jesus.

The Baby Jesus Himself is the third mystery in the story. The Magi found Him in a house in Bethlehem sometime after His birth.  Contrary to many nativity scenes the Magi almost certainly did not arrive to worship the infant Jesus the same night as the shepherds.  A choir of angels announced the birth of Jesus to the shepherds.  The baby wrapped in swaddling cloths and lying in a manger is the sign for the shepherds, while the star was the sign for the Magi. The trip of the Magi to Bethlehem may have lasted more than a year which we glean from the account of their journey in Matthew.

The Magi came first to Jerusalem, where they asked, Matthew 2:2 (ESV) 2 …“Where is he who has been born king of the Jews? For we saw his star when it rose and have come to worship him.”[3]

Going to Jerusalem to ask about the new king was not a particularly wise move because there was already a king in Jerusalem; Herod the Great.  Matthew 2:3-8 (ESV) 3 When Herod the king heard this, he was troubled, and all Jerusalem with him; 4 and assembling all the chief priests and scribes of the people, he inquired of them where the Christ was to be born. 5 They told him, “In Bethlehem of Judea, for so it is written by the prophet: 6 “ ‘And you, O Bethlehem, in the land of Judah, are by no means least among the rulers of Judah; for from you shall come a ruler who will shepherd my people Israel.’ ” 7 Then Herod summoned the wise men secretly and ascertained from them what time the star had appeared.8 And he sent them to Bethlehem, saying, “Go and search diligently for the child, and when you have found him, bring me word, that I too may come and worship him.”[4]

But, this was, of course, a lie; Herod had no intention to worship the Christ Child.  His plan was to kill Jesus to protect his throne. The Magi did not return to Herod because they were warned by an angel and this made Herod furious. Herod knew that Bethlehem was the town where the Child Jesus was born, but he did not know which child in which house. Therefore, he ordered the slaughter of all the boys in Bethlehem two years of age or less. We remember this event each year on December 28, the Day of the Slaughter of the Holy Innocents.

How was the eternal Son of God made flesh? We do not understand this mystery. The greatest mystery is also the most precious gift for us.

The greatest mystery in this account of the Magi, and the greatest mystery of all is the Child who avoided King Herod’s sword.  He is the Word made flesh that lived among us. As St. John says in his Gospel, John 1:1-3 (ESV) 1 In the beginning was the Word, and the Word was with God, and the Word was God. 2 He was in the beginning with God. 3 All things were made through him, and without him was not any thing made that was made.[5] John 1:14 (ESV) 14 And the Word became flesh and dwelt among us, and we have seen his glory, glory as of the only Son from the Father, full of grace and truth.[6]

The Word was made flesh, born of the Virgin Mary. He grew up as the son of Mary and Joseph. He was baptized in the Jordan River by John the Baptist and began His public ministry; the proclamation of the forgiveness of sins by the blood of the Savior. He made this sacrifice Himself on the cross and was resurrected the third day. We are all sinners and cannot justify ourselves before God, but we have the promise of eternal life because of Jesus Christ; the Word made flesh.

How was the eternal Son of God made flesh? We do not understand this mystery. The greatest mystery is also the most precious gift for us.

When the Magi found Jesus they offered Him gifts of gold, incense and myrrh. The value of gold is obvious. It was a gift fit for a king. The incense was burned for its fragrance in the presence of a king, also in the temple in the worship of God. So, the incense was a gift for a king, also for a priest. We believe in Jesus as King of kings and our High Priest in heaven, the only Mediator between God and men. Myrrh was used as oil to anoint kings, prophets and priests, also to prepare dead bodies for burial.  Nicodemus brought 75 pounds of myrrh and aloes to prepare Jesus’ body for burial after His crucifixion.  Myrrh from the Magi is a glimpse forward to the cross and tomb.

The most precious gift of all is the Child Jesus Himself who brings to you God’s forgiveness and eternal life. Not only just for you, but for all people.  Epiphany means manifestation.  The manifestation of God in Christ, and the visit of the Magi was the first manifestation of the Savior to all nations. The Magi were foreigners; Gentiles; they were not men of Israel. But the Savior’s promise was made to all nations.

Jesus came first to the Jews, according to the promise that God made to Abraham and the patriarchs. But after his resurrection, He sent his church to proclaim the gospel to all parts of the world. St. Paul says in our epistle, Ephesians 3:6-10 (ESV) 6 This mystery is that the Gentiles are fellow heirs, members of the same body, and partakers of the promise in Christ Jesus through the gospel. 7 Of this gospel I was made a minister according to the gift of God’s grace, which was given me by the working of his power. 8 To me, though I am the very least of all the saints, this grace was given, to preach to the Gentiles the unsearchable riches of Christ, 9 and to bring to light for everyone what is the plan of the mystery hidden for ages in God who created all things, 10 so that through the church the manifold wisdom of God might now be made known to the rulers and authorities in the heavenly places.[7]

The manifold wisdom of God in Christ Jesus has been made known to us Gentiles and like all those who have received new life in baptism, we are the church.  As the Church, we bring this wisdom of God in Christ to others. With the help of the Holy Spirit, we talk with our family and neighbors about the great mysteries of Christ and all He has done for us.  This baby in Bethlehem worshipped by the Magi, hunted by the King, is the Word made flesh.  He is God incarnate who has come to be the sacrificial Lamb to take away the sins of the world. He is the one who sets you free from your sins.  Jesus is the greatest mystery; the greatest gift of all.  He is God in flesh made manifest to the world; beginning with the mysterious Magi from the East and continuing today here and throughout this nation and the world.  Amen.