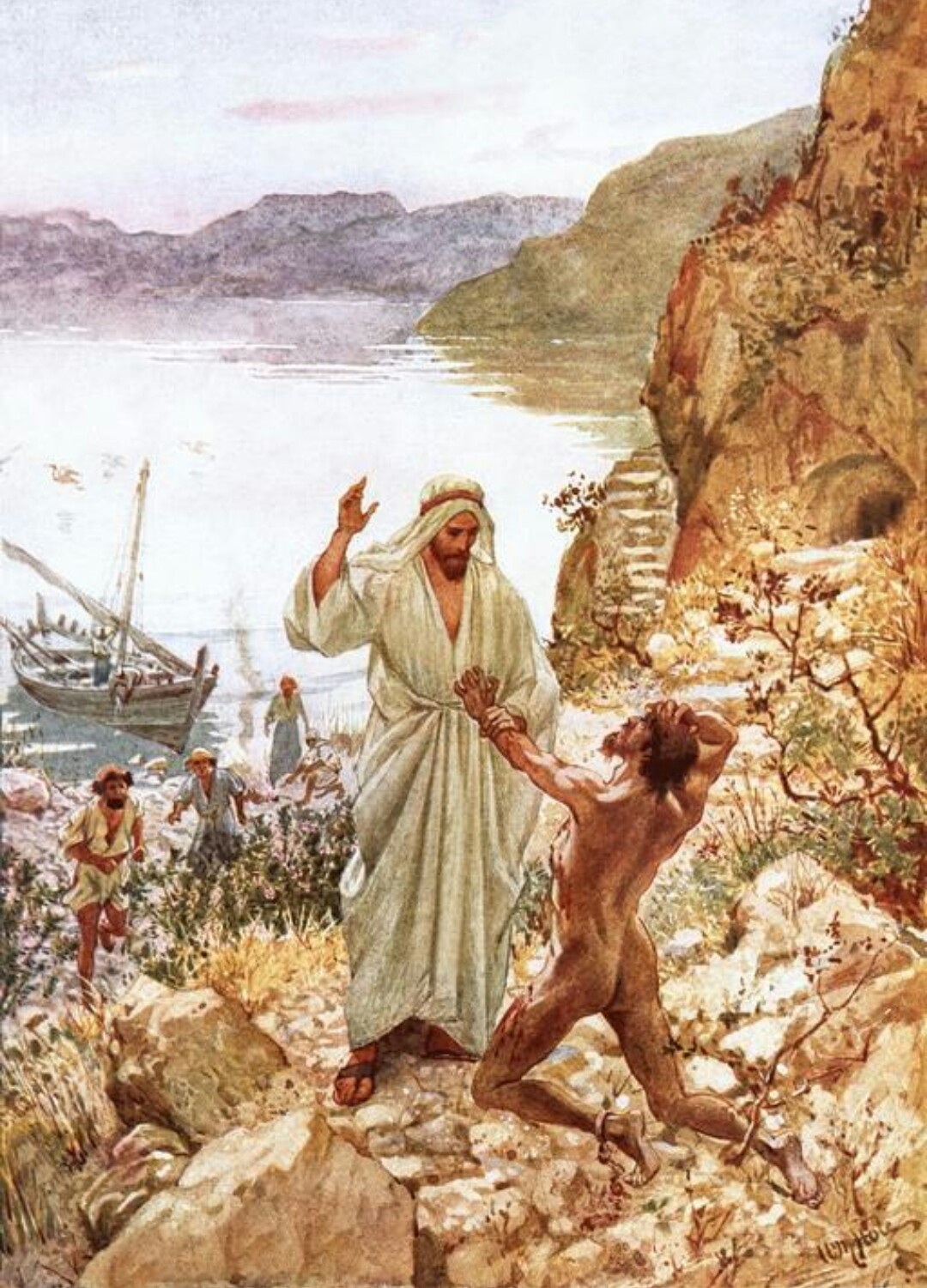 Jesus and His disciples cross the Sea of Galilee into an area that is more heavily populated with Gentiles.  No sooner do they set foot on the shore than a demon-possessed man challenges them.  This demon possession is pretty intense.  The man lives among the dead, he wears no clothes, and the locals are unable to restrain him even with chains.

Jesus shows His power over the demons by conversing with them.  Although the demons are the sworn enemies of God, they must answer His questions.  They have no choice.  When Jesus asks “What is your name?” they answer, “Legion”, indicating the strength of the evil forces in this man.  A legion is an army numbering in the thousands.  Thousands of demons against Jesus, but it wouldn’t make a difference if there were a billion, Jesus is Lord over everything and even the demons must obey Him.

When the Lord commands them to leave the man, they have no choice but to leave.  The only question is where to go.  The demons ask to inhabit a nearby herd of pigs, but even for this they need Jesus’ permission.  The demons enter the pigs and the pigs promptly stampede into the lake and drown.  After that we aren’t told what happens to the demons.

The swineherds have a predictable response; they flee.  They flee into a nearby city for help.  When the people hear the news they go out to check on Jesus.  The scene gives us insight into the difference between people who are saved and people who are still slaves of the devil.

The man who is now saved is sitting at Jesus’ feet; he is listening as Jesus teaches.  The round trip to the city probably takes a few hours, so the man who is now free of demons has several hours of Bible class with Jesus.  He cannot get enough of Jesus.  He wants to go along when Jesus returns across the lake.

The people from the city are terrified of Jesus.  They ask Him to leave.  They are polite, but they still see Jesus as a problem … not as a savior.

Jesus complies with the people’s wishes.  He departs, but He leaves a missionary behind.  The man who is now demon free wants to go with Jesus, but Jesus sends him away, saying, Luke 8:39 (ESV) 39 “Return to your home, and declare how much God has done for you.” And he went away, proclaiming throughout the whole city how much Jesus had done for him.[1]

Now whenever the topic of demons comes up, our imaginations tend to go wild.  Our culture has come up with all kinds of speculations about demons and most of them are wrong.

The Bible teaches us that demons were once angels.  God created them sometime during the six days of creation along with all the other angels.  Soon after the creation a group of angels rebelled against God and god condemned these angels to an eternity of punishment.  The Bible tells us that God created hell specifically for these evil angels and refers them as fallen angels, unclean spirits, evil spirits, demons, and so forth.

The problem with being an enemy of God is that God is all-knowing, all-powerful, unlimited by time and space.  Even though the demons are fallen, they are still God’s creatures and cannot win against God in a direct attack.  They must find some other way to express their hatred of God.  The battlefield they have chosen is the human race … us.

The demons’ main weapon is deception as Jesus says in, John 8:44 (ESV) 44… When [the devil] lies, he speaks out of his own character, for he is a liar and the father of lies.[2]  It wouldn’t be much of a temptation if the devil appeared to us dressed in red body armor with horns and a pitch fork, and smelled like smoke, but the devil is much more clever.  Demons present temptation in ways that make sense … ways that seem like the right thing to do … ways that have a certain beauty.  As the Apostle Paul writes, 2 Corinthians 11:14 (ESV) 14 And no wonder, for even Satan disguises himself as an angel of light.[3]

In Eden, the devil uses a serpent to tempt Eve to eat of the forbidden fruit.  Mankind falls to that temptation.  From that time on, every human being inherits a sinful nature at conception as David writes in, Psalm 51:5 (ESV) 5Behold, I was brought forth in iniquity, and in sin did my mother conceive me.[4]  And Paul in Romans 8:7-8 (ESV) 7 For the mind that is set on the flesh is hostile to God, for it does not submit to God’s law; indeed, it cannot. 8 Those who are in the flesh cannot please God.[5]

The rite of baptism in the Lutheran Service Book states, “The Word of God also teaches that we are all conceived and born sinful and are under the power of the devil until Christ claims us as His own.  We would be lost forever unless delivered from sin, death, and everlasting condemnation.”[6]  Because we humans pass our sinful nature down from generation to generation, slavery to sin and Satan is our natural state.  We are by nature sinful and unclean.  Instead of loving God with all our mind, soul, and strength, we love ourselves.  Every human being by nature is terrified of God, resists him, and fears him.  Our lives apart from God show that we are disobedient.  The prophet Isaiah writes, Isaiah 65:2 (ESV) 2 I spread out my hands all the day to a rebellious people, who walk in a way that is not good, following their own devices;[7]

The devil’s control over us at birth may not be as spectacular as the man in today’s Gospel, but we all enter this world at odds with God and slaves to sin.

Since demons deal in deception, they adapt their lies to the culture of any given time and place.  Rationalism has had a profound effect on our culture.  Many today don’t even believe demons exist.

Demons don’t always identify themselves by driving pigs into a lake.  Sometimes they quietly inhabit people who look like grandmas and grandpas.  They inhabit people who look respectable on the outside and seem very nice.  Just like dangerous strangers tempt children with candy, demons tempt us with all the things we like.  It is their goal to make us feel very comfortable and even righteous while traveling the path to hell.

The real lesson that we can take away from today’s Gospel is that Jesus is the one who exposes demons and deals with them.  The same Jesus Christ who demonstrated His power over demons in today’s Gospel has defeated the devil once and for all on the cross.  Trust in Him.  Trust in His holy life, His innocent suffering and death, His resurrection from the dead and His ascension into heaven.  He is the only one who can protect you from the attacks of the devil.  He is the only one who can give you life everlasting.  Trust in Christ crucified and risen from the dead, and pray that the Holy Spirit will work that saving faith in all people.  Amen