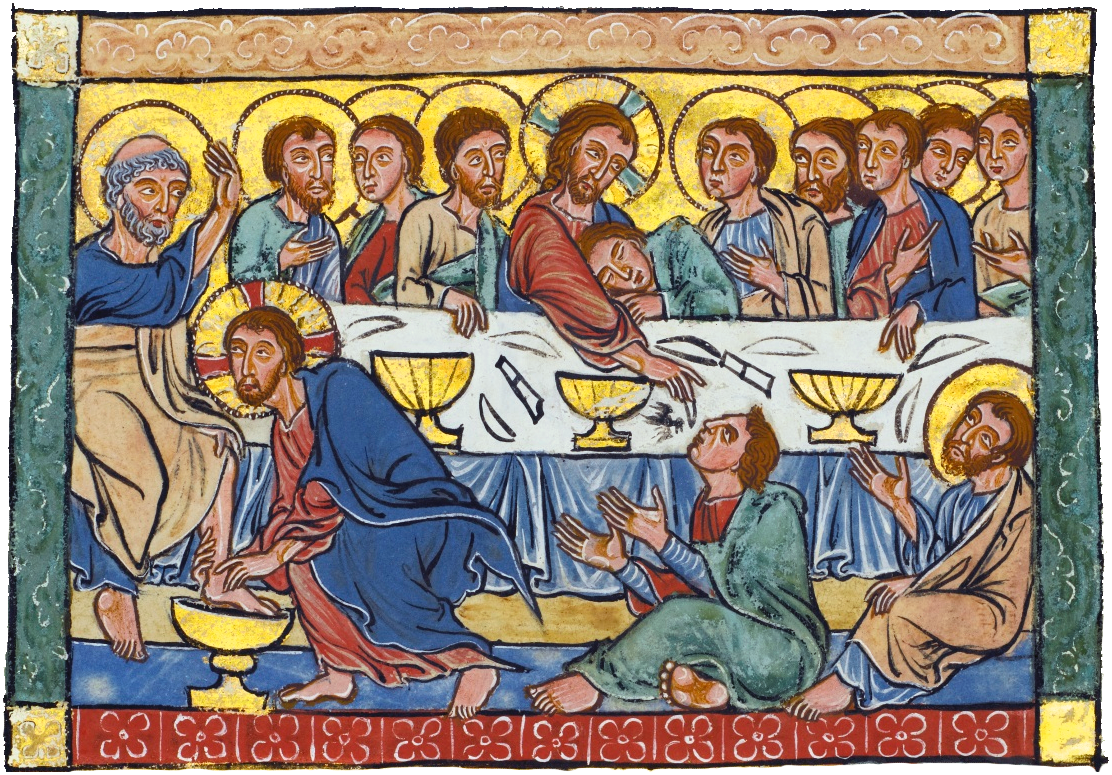 Today, there’s blood all over the place in our liturgy, hymns, and Scripture Readings. The sight of blood makes many of us squeamish. Perhaps the bloodiness of our Readings strikes you as odd and primitive, even unsettling. So, as you hear the Word of God you need to look under all this blood to find that there’s more there than meets the eye.

Our Old Testament Reading sets the stage for the first Passover. The Lord had visited nine plagues on Egypt; the Passover marked the tenth and final one. To every house that was not protected by the blood of consecrated lambs, the Lord came and struck down firstborn sons. On the other hand, the Lord caused the destroyer to pass over houses marked by the blood of a lamb.

This was such a momentous occasion that God commanded His people to celebrate the Passover every year as a memorial meal. Moses told the people, “When you come to the land that the Lord will give you, as He has promised, you shall keep this service. And when your children say to you, ‘What do you mean by this service?’ you shall say, ‘It is the sacrifice of the Lord’s Passover, for He passed over the houses of the people of Israel in Egypt, when He struck the Egyptians but spared our houses’ ” (Exodus 12:25–27a).

Take a hard look at the Passover. Dwelling only on the blood and violence, it might cause us to stumble. It shocks our sensibilities. What kind of God would inflict such wrath against even helpless children? And doesn’t it seem morbid or cruel to memorialize such a terrible event?

Now look deeper. There’s more here than meets the eye. After Moses announced the institution of the Passover, we are told, “The people bowed their heads and worshiped” (Exodus 12:27b). They recognized that when the Lord speaks His will, the only proper response is worship. The Passover is all about the First Commandment: “You shall have no other gods.” The Lord had said concerning the Passover, “On all the gods of Egypt I will execute judgments: I am the Lord” (Exodus 12:12). The tenth plague was divine warfare against God’s idolatrous enemies; against the Egyptian false gods and the oppressors of His people. And later in Exodus, God said this: “I the Lord your God am a jealous God, visiting the iniquity of the fathers on the children to the third and the fourth generation of those who hate Me” (20:5). This means that under all the dead Egyptians, you should not see innocent victims of a capricious god, but impenitent sinners receiving just judgment from the one Holy God. And all of God’s acts of judgment on idolaters—from the flood, to the Passover, to the conquest of Canaan—are intended to warn us about the consequences of idolatry and impenitence. They are previews of the final judgment.

You also should see that this judgment is what you deserve and more. For your idolatrous sins, for every time you have not feared, loved, and trusted in the Lord your God with all your heart.  For all this you deserve for the destroyer to come and spill your blood on the ground, while your soul is taken swiftly to hell for eternal punishment. The Lord is no tame God. The apostle known for writing about God’s grace, St. Paul, also wrote this: “Do not be deceived: God is not mocked, for whatever one sows, that will he also reap” (Galatians 6:7).

For their own sins, the Israelites deserved the same fate as the Egyptians. But now look at the blood of the Passover lambs and see more there than meets the eye. To the naked eye, the blood of lambs would appear to be the normal sticky red substance, but God attached His Word of grace to the lambs’ blood and gave His people a means of salvation from the destroyer. Under the blood of Passover lambs, you do not find any merit or worthiness in the Israelites, but only the promise of deliverance from the gracious and merciful Lord.

So the Passover was to be celebrated by Israel above all as a remembrance of His election of Israel and of His protection and salvation of them from their enemies. Later the Lord would attach His word of forgiveness to the blood of lambs, goats, and bulls in the sacrificial system operated by the priests at the tabernacle and the temple. Through the pouring out of blood in the Most Holy Place, God provided a means of cleansing and forgiveness for His people’s sins. As the Epistle to the Hebrews says, “Indeed, under the law almost everything is purified with blood, and without the shedding of blood there is no forgiveness of sins” (9:22).

And this leads us to find more than meets the eye in the Upper Room on the night when Jesus was betrayed. It was a Passover Meal, so Israel’s deliverance from Egypt was in view, and the recently shed blood of Passover lambs would be fresh on the disciples’ minds. Surely they had celebrated this meal dozens of times with their families from little on, and they knew the Passover liturgy by heart. They thought they knew what was coming as they celebrated it with Jesus, but there would be way more than meets the eye.  Jesus, the Lord of Israel Incarnate, revises the Passover liturgy.

St. Mark writes, “As they were eating, Jesus took bread, and after blessing it broke it and gave it to them” (14:22). So far, so good; no surprises yet. But here’s the bombshell: Jesus said over the bread, “Take; this is My body” (v. 22). The disciples must have looked at one another with bewildered glances. Then Jesus seems to slip back into the regular liturgy: “He took a cup, and when He had given thanks He gave it to them, and they all drank of it.” Okay, back to normal, the disciples must have thought, looking at each other with relief. Perhaps they had just misheard Jesus earlier. But then another bombshell! Jesus “said to them, ‘This is My blood of the covenant, which is poured out for many’ ” (v. 24). Or more literally: “poured out on behalf of the masses.” Once again, Jesus boggled their minds!

At this unprecedented Passover Meal, Jesus teaches three main things to His disciples. First, that in a short while, His body would be given and His blood shed on the cross—and that under this apparently senseless slaughter of a Righteous Man, they should see His death as a ransom for the masses of humanity; for the sins of the whole world. This is God’s final judgment on sin, and from that day forward, the only sin that condemns to hell remains idolatry, but specifically the idolatry of rejecting Jesus and His death for the life of the world.

Second, Jesus teaches that in a mysterious and supernatural way, there was more than meets the eye under the simple bread and wine of an ordinary Passover Meal—now, by the power of His Word, the bread was truly His body and the wine was truly His blood, given to His disciples for the forgiveness of sins, life, and salvation. Further, by His words “Do this,” He instituted the Lord’s Supper for His Church to proclaim His death till the end of time (cf. 1 Corinthians 11:26).

And third, Jesus was teaching them that the Passover and the sacrificial system of Israel were types which prefigured His once-for-all sacrificial death on the cross, but now these Old Testament ceremonies must give way to the New Testament in His blood.

John the Baptist had pointed to Jesus and proclaimed, “Behold, the Lamb of God, who takes away the sin of the world!” (John 1:29). Later, St. Paul would write, “Christ, our Passover lamb, has been sacrificed” (1 Corinthians 5:7). At the Last Supper and on Good Friday, John’s preaching was fulfilled, when God’s holy, spotless Passover Lamb, Jesus Christ, finally offered His life as a ransom for the masses, so that sinners don’t have to get what they deserve but instead what Jesus has earned for them. Everything in the Old Testament was pointing forward to the coming of the Lord in the flesh as the Messiah to redeem His people and win forgiveness for not just Israel but Gentiles too.

There’s another peculiar part of the Old Testament that finds its fulfillment and explanation here. The Lord had told Israel, “If any one of the house of Israel or of the strangers who sojourn among them eats any blood, I will set My face against that person who eats blood and will cut him off from among his people. For the life of the flesh is in the blood, and I have given it for you on the altar to make atonement for your souls, for it is the blood that makes atonement by the life” (Leviticus 17:10–11). The blood of animals in the Old Testament was reserved for atonement for the people’s sins, but the prohibition on its consumption would end with the institution of the Lord’s Supper.  The Lord’s Supper is the New Testament in Christ’s blood.  Now and until Christ returns, the atoning blood of Jesus would be sacramentally fed to God’s people in, with, and under the wine of Holy Communion.

And what is in that blood that doesn’t meet the eye? Life! The blood of Jesus delivers to us the forgiveness of sins and serves as the antidote to death. God said, “The life is in the blood,” and that is what Christ’s disciples receive as the life-giving blood of Jesus is drunk by us in the Lord’s Supper: “For where there is forgiveness of sins, there is also life and salvation.” For, as you come in faith to Jesus to feed on His body given and His blood shed for you, Jesus promises, “Whoever feeds on My flesh and drinks My blood has eternal life, and I will raise him up on the last day. For My flesh is true food, and My blood is true drink. Whoever feeds on My flesh and drinks My blood abides in Me, and I in him” (John 6:54–56). Amen.