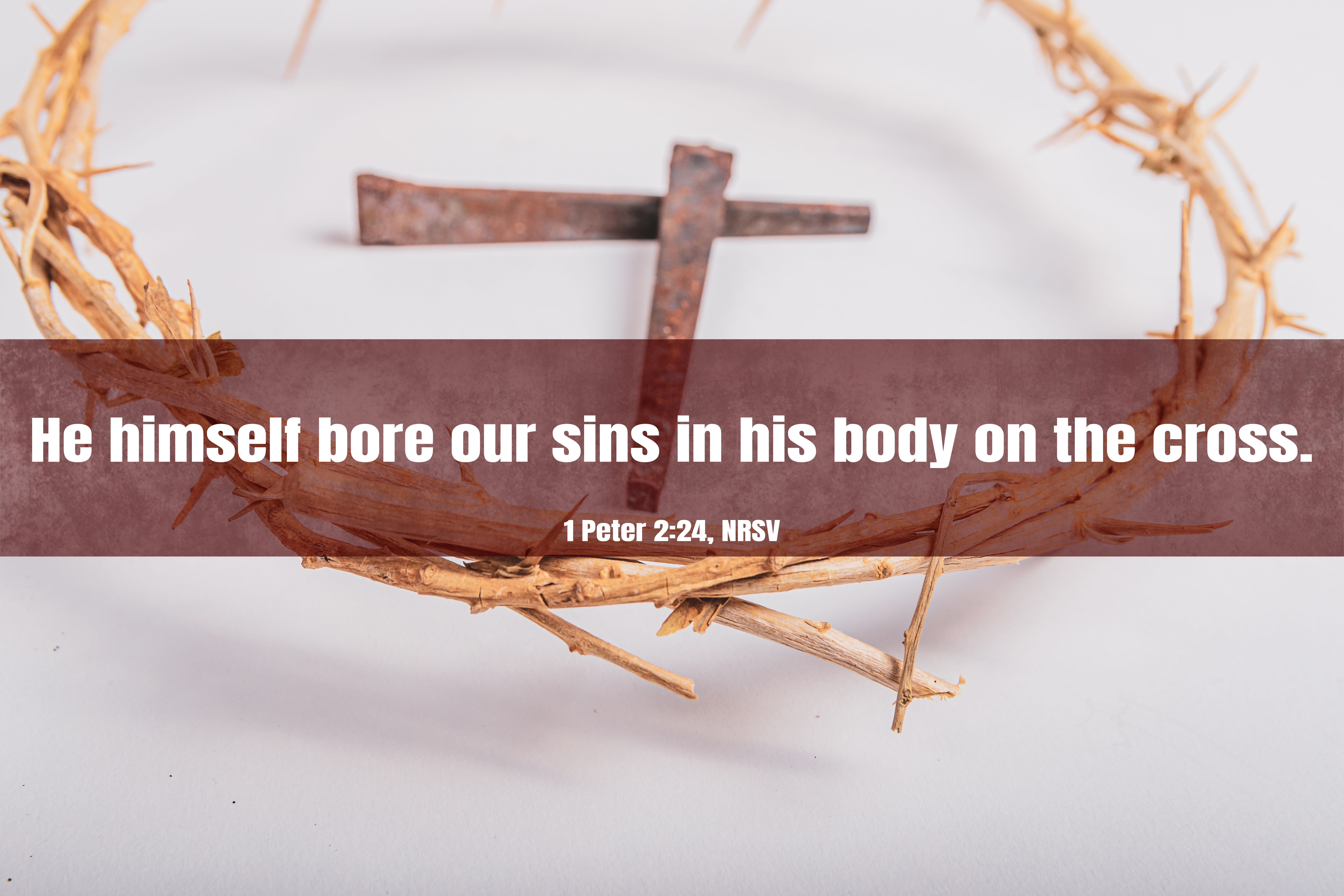 Our first six midweek Lenten sermons focused on what is seen through the eyes of various characters in the Passion—the perspectives of Judas, Peter, the chief priests and scribes, Pontius Pilate, the Roman soldiers, and the Jewish crowd. Yesterday, we meditated on how there is much more than meets the eye going on at the Last Supper.  Today, we’ll view Jesus’ crucifixion through God’s eyes—what God the Father, Son, and Holy Spirit saw, and what they accomplished at the cross for us and for our salvation.

What did God the Father see on Good Friday? He saw His only-begotten Son suffering and dying unjustly on a Roman cross. Can you imagine watching your own child die in this way? It is beyond comprehension. As sinful mortals, we cannot understand what it is like to be the immortal, holy God, but surely the Father’s heart was grieved beyond words.

Yet what’s even more unfathomable is that God loves you so much that He willingly inflicted this on His beloved Son. St. Paul wrote that the Father “did not spare His own Son but gave Him up for us all” (Romans 8:32), and that “God shows his love for us in that while we were still sinners, Christ died for us” (Romans 5:8). He didn’t wait around for us to clean up our act first, but while we were ungodly and enemies of God, He slaughtered His Son in our place, under His righteous anger against the sin of the world.

This means that we provoked the death of Jesus. On Pentecost, St. Peter preached, “This Jesus, delivered up according to the definite plan and foreknowledge of God, you crucified and killed by the hands of lawless men” (Acts 2:23). The Father gave the Son to the world, but “You crucified and killed” Him. Yes, Peter is also talking to you and me. He isn’t offering some anti-Judaic rant but an indictment of all sinners. Whether a sinner lived in the first or twenty-first century, the guilt and blame is all the same: we all crucified the Son of God by our sin. As we sang in the Lenten hymns:

I caused Your grief and sighing

As countless as the sands.

I caused the woes unnumbered

With which Your soul is cumbered,

O child of woe: Who struck the blow

That killed our gracious Master?

“It was I,” thy conscience cries,

As we acknowledge our sin and unworthiness, we need to see ourselves nailing Jesus to the tree, but at the same time, His crucifixion was “according to the definite plan and foreknowledge of God” the Father. What value did the Father see in this plan? The Father saw, and now all of us can see, God’s own glory being manifested to the world. This is what Jesus prayed for, just hours before His crucifixion: Jesus “lifted up His eyes to heaven, and said, ‘Father, the hour has come; glorify Your Son that the Son may glorify You, since You have given Him authority over all flesh, to give eternal life to all whom You have given Him. And this is eternal life, that they know You, the only true God, and Jesus Christ whom You have sent. I glorified You on earth, having accomplished the work that You gave Me to do’ ” (John 17:1–4).

The Father and the Son both glory in having mercy on sinners. That is what they accomplished during Christ’s perfect life, suffering, death, and resurrection. The Father sees all of your sin taken upon Jesus on the cross, even the sin of crucifying His Son. Moreover, He sees His wrath against sin being poured out upon the Son and the gates of hell prevailing over Him. Yes, hell is being under God’s wrath, and that is what the Father sees Jesus taking, in your place, to save you.

On Good Friday, what does Jesus see when He looks at you and all sinners? He recognizes you as the cause of His woe, but He doesn’t hold this against you. The Lamb of God bears this willingly. He wants nothing other than to be your Savior.

Now for the Son’s perspective. Jesus always knew that His name means “the Lord saves,” so He sees Himself as the object of the Father’s wrath but as the subject of your salvation. He drinks His Father’s wrath down to its dregs, finally crying out in abandonment from His Father, “My God, My God, why have You forsaken Me?” But this is no cry of despair. He suffers abandonment from His Father, He suffers the pains of a sinner condemned to hell, but still He looks to His Father with perfect love and trust: “My God,” He cries, with unbroken faith. With the words “Father, into Your hands I commit My spirit” (Luke 23:46), He breathes His last. He knows His Father still loves Him and will raise Him from the dead on the third day.

On Good Friday, what does Jesus see when He looks at you and all sinners? He recognizes you as the cause of His woe, but He doesn’t hold this against you. The Lamb of God bears this willingly. He wants nothing other than to be your Savior. He looks at you and then prays, “Father, forgive them, for they know not what they do.” He stares into your sinful eyes and says, “I love you all the same. I and My Father love you so much that We would make this sacrifice for you. I am offering Myself under the Father’s wrath in your place to save you from your sins and spare you from hell.”

Finally, what does the Holy Spirit see? First, He sees the Son and comes to Jesus’ aid as He offers His life as a ransom to the Father. We don’t know the ins and outs of this, but the Epistle to the Hebrews says that Christ, “through the eternal Spirit offered Himself without blemish to God” (Hebrews 9:14), thus accomplishing your redemption by the blood of His cross. Jesus had received the Spirit without measure in His Baptism, and we know that the Spirit is the Helper, so it makes sense that the Holy Spirit not only helped Jesus fulfill all righteousness during His earthly ministry, but also helped Him offer Himself to the Father on the cross.

Second, on Good Friday, the Spirit sees that everything necessary for the salvation of sinners is achieved by the Son. Again, Jesus had promised just hours before His death, “When the Spirit of truth comes, He will guide you into all the truth . . . He will declare to you the things that are to come. He will glorify Me, for He will take what is Mine and declare it to you. All that the Father has is Mine; therefore I said that He will take what is Mine and declare it to you” (John 16:13–15). Here we see the Holy Trinity working together in their natural perfect harmony. The Father gave the Son the task of redeeming mankind. The Son willingly took this task upon Himself. And the Holy Spirit joyfully proclaims this message to you so you may enjoy the benefits of the Son’s sacrificial death.

The Spirit takes what is Christ’s and declares it to you. He takes the righteousness of Jesus and instills it in the waters of Holy Baptism to make it a life-giving water, rich in grace, and a washing of new birth into God’s eternal kingdom. He takes the forgiveness of Jesus and declares it to you through the Gospel and through the words of Absolution. And He presents to you the body given and blood shed for you on the cross to be received for forgiveness of sins, life, and salvation in Holy Communion.

On Good Friday, God’s eyes see everything necessary to save you from sin, death, and hell. Although your own eyes look upon your guilt, unworthiness, and impurity, the Father looks upon your sin forgiven for Christ’s sake, the Son credits His own righteousness to your account, and the Holy Spirit makes you a participant in the holiness of Jesus. You are baptized in the name of the Father, the Son, and the Holy Spirit, so keep this truth on your mind — in your heart — and before your eyes at all times: When God looks at you, He sees the apple of His eye, His beloved child united with Christ in His death and raised up to new, eternal life with Him. Amen.