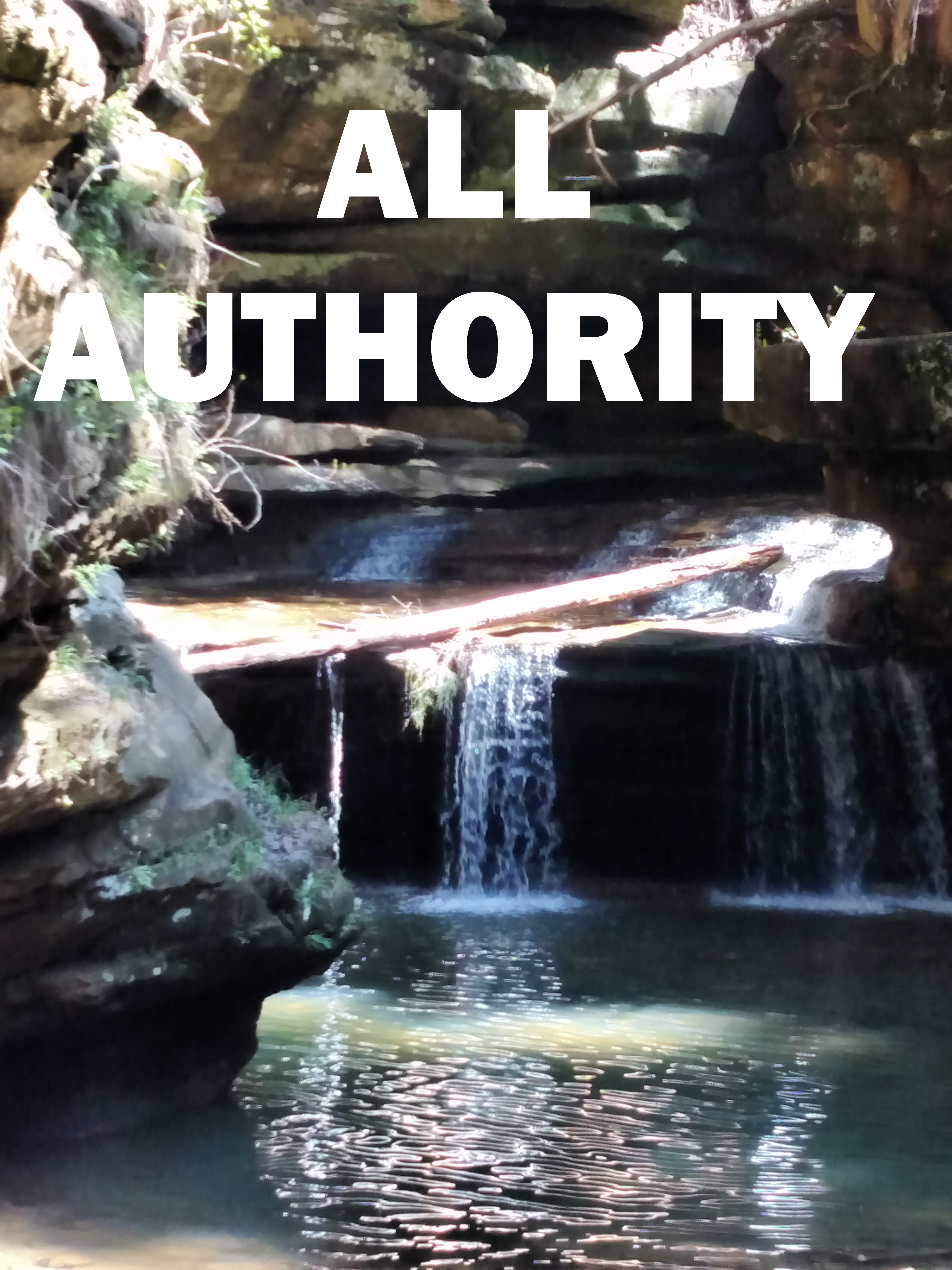 Authority.  This is not one of our favorite words.  If someone tells you, “I have authority over you,” what does that mean?  How does it make you feel?  During the COVID19 Pandemic we have had to learn a lot about authority.  The governor exercised his authority and life changed dramatically.  Very often, for many of us, we don’t much like authority.

I don’t know about you, but when someone tells me not to do something, it kind of makes me want to do it.  From the time a little child first tells her mother, “No!,” the quest for autonomy, and the rebellion against authority has started.  With Adam and Eve eating the fruit of the forbidden tree, rebellion against authority began and it has been accelerating ever since.

In 1981, Jeffery Stout, a professor of religion and philosophy at Princeton University, published a book called The Flight from Authority. In it, he described a social and philosophical trend in western society. Collectively, he argued, we have been on a, “flight from authority,” for several centuries. In the Reformation, we fled the authority of the Catholic Church. Under rationalism, we ran from the authority of the Scriptures. With Kant, we turned our backs on the authority of reason, and then morality. The flight continues in our own times as we resist conformity to governments, social norms, and institutions in general. Obedience is out. Autonomy is in. Simply put, we like to be charge.[1]

What does the Bible say about authority?  When we study the fourth commandment it is all about authority; “Honor your father and your mother.”  Parents have authority by virtue of creating or adopting a child. We have a lot of authorities in our lives.  Parents, teachers, bosses, coaches, pastors, police, government.  All individual authority, however, comes from one authority. Authority comes from God so that His Kingdom comes and His will is done.  Those in authority are masks of God, doing Jesus’ work of service, in love for their neighbor.

In our Gospel reading from Matthew today Jesus talks about authority.  Matthew 28:18 (ESV) 18 And Jesus came and said to them, “All authority in heaven and on earth has been given to me.[2] How much authority does Jesus have?  All authority.  Jesus is in charge.  What does he tell you to do?  Matthew 28:19-20 (ESV) 19 Go therefore and make disciples of all nations, baptizing them in the name of the Father and of the Son and of the Holy Spirit, 20 teaching them to observe all that I have commanded you. And behold, I am with you always, to the end of the age.”[3]

Jesus’ authority comes from who He is.  Jesus is the Son of God, begotten of the Father from eternity.  He is God in flesh, conceived by the Holy Spirit, born of the Virgin Mary.  Jesus’ authority is confirmed at His baptism with the presence of the Holy Spirit and the voice of God the Father, Matthew 3:17 (ESV) 17 … “This is my beloved Son, with whom I am well pleased.”[4] His authority is shown in His miracles such as when Jesus calms the storm on the Sea of Galilee, Luke 8:25 (ESV) 25 …[the disciples] were afraid, and they marveled, saying to one another, “Who then is this, that he commands even winds and water, and they obey him?” [5]

Jesus has all authority.  He has the authority to forgive your sins because He takes responsibility for all sin.  He who knew no sin became sin for you and offers Himself as the atoning sacrifice upon the altar of the cross.  Jesus is God in flesh and all authority has been given to him.  At His transfiguration, God the Father says, Matthew 17:5 (ESV) 5 … “This is my beloved Son, with whom I am well pleased; listen to him.”[6]  Listen to Jesus.  Do what He says.  Obey Him. He has authority over you.  He has all authority.  He exercises His authority with Divine perfection.

As you exercise the authority given to you by God, as a parent, teacher, boss, coach, pastor, police officer, government official, or in any other way, remember that you are a mask of God for good in the Kingdom of God.  You are a servant of God serving your neighbor. Also, remember always, with authority comes responsibility.

In our world there is the temptation to seek autonomy instead of obedience, but there is also the temptation for people with authority to abuse their authority and ignore their responsibilities.  You can all think of examples from your own life where someone in power overstepped their authority:  an abusive manager, pastor, parent, teacher, police officer, government official.

Over these last couple of weeks we have seen the horrifying video of a Minneapolis police officer abusing his authority.  Instead of using the least force necessary to arrest a suspect, he applied deadly force in a slow, brutal, deliberate way, taking the life of George Floyd.  This former officer’s abuse of power caused the death of a fellow human being.  This is a great evil and now we trust those with authority to bring justice.

Protests and demonstrations have been staged all over the country and the world, including here in Hamilton, to call out this deadly abuse of power and speak against racism.  According to the First Amendment to the U.S. Constitution, citizens have the right to peaceably assemble and petition the Government for a redress of grievances.  The people have a right to peaceably assemble, but those who bring violence, looting and destruction into the demonstrations are abusing their right to assemble.  They are overstepping their authority and neglecting their responsibilities.

This is a challenging time for our nation and, as Christians, we need to be careful how we respond.  This particular case is one in which there is nearly universal condemnation and calls for the former officer to be punished.  This is a time we should, as a nation, be able to unite to work for real solutions to end the abuse of police power.  But there are those in our nation who abuse their authority and use vague charges to divide us and promote in us hatred of others.  There are those who for power and political leverage take the actions of the few and indict the many.  There are those who strive to have us categorize people into groups and dismiss them. Abuse of power is evil.  Racism is evil.  Division and hatred are evil.  These are sins that we can all be drawn into, and these are sins for which we must repent.

When the actions of a few are magnified and applied to an entire group that is evil.  To be identified as a victim, or an abuser, simply based on the color of your skin, is wrong because we are each individuals with unique experiences.  It is wrong, but there is great power in division and there are those across the political spectrum that want to emphasize distinctions and differences, and drive wedges between us.  We must reject these divisions and hatred, and work together to stamp out the abuse of power at all levels for those in authority.  Christians are called to abhor racism, division, hatred and abuse of authority.

As a Christian, as a baptized child of God, you are under the authority of Jesus and He has instructed you to love your neighbor.  He has commanded you to love your enemy and pray for those who persecute you; to turn the other cheek, and go the extra mile.  Racism in all forms is contrary to Christianity.  In the Bible there are no races.  There is no mention of red and yellow, black and white; the only division is Jew and Gentile which is undone in Jesus.  St. Paul writes in Galatians 3:26-28 (ESV) 26 for in Christ Jesus you are all sons of God, through faith. 27 For as many of you as were baptized into Christ have put on Christ. 28 There is neither Jew nor Greek, there is neither slave nor free, there is neither male nor female, for you are all one in Christ Jesus.[7]

In the Kingdom of God there is no place for any type of racism or hatred or division.  When you fall prey to these temptations, repent and receive forgiveness in the blood of Jesus shed for you.

We all have room to improve in understanding people who come from different backgrounds.  We can all benefit by empathetically listening to those who look different from us; who come from different places, and who have different experiences. I have never been pulled over for driving while black, but I know people who have.  I am a fourth generation American with family roots and support.  Others are new immigrants, alone in this country. Honor others’ perspectives even if you don’t share them.  Racism and hatred have no place in our nation and certainly have no place in the Church. Here we are one in Christ.  Here we kneel together and confess our sins and receive forgiveness from Jesus.  As the old Christian Folk song says, “We are one in the Spirit, we are one in the Lord.”

Learn from others.  Love and serve your neighbor.  Fight racism and hatred and division and abuse.  Obey Jesus.  Obedience may be radically counter cultural, but it is not optional.  Jesus has all authority; listen to Him.  Love God.  Love your neighbor.  Amen.