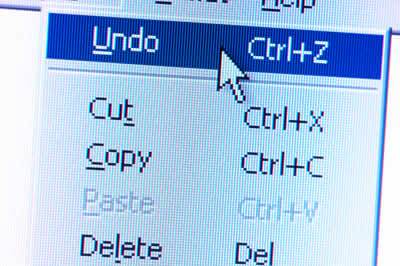 Control-z.  Control-z is wonderful.  How many know what control-z does; or command-z?  I asked Olivia Pirn if she knew what control-z is and she said she learned about it a few weeks ago and it changed her life.  What is this life changing tool?  Control-z is the keystroke shortcut for the “undo” command on a computer.  Control-z takes away your mistakes.  For those who prefer, there is an “undo button” you can click.

As I am working on the computer and make a mistake, I just hit “undo”.  Boom!  Mistake gone. How wonderful would it be to have an “undo” button in life?  For those times when in anger or haste you said or did something hurtful that you immediately wanted to undo?

Have you ever tried to untangle a snarled mess of fishing line or string or a long extension cord?  It takes patience and perseverance–not my strong suits–to methodically work your way through the mess and get it untangled.  What happens when you get frustrated, lose your cool, and just give the whole knot a good strong yank?  Now it is nearly impossible.  You could use an undo button; control-z for life.

How many times in your relationship with someone do you find that you have a tangled knot of issues and instead of patiently working it out, you get frustrated and angry and yank hard on the knotted issues with your words or actions and turn the tangled relationship into an impossible mess.  It would be good to have an undo button.

Have you ever broken something? The ball goes through the window, you drop you cell phone on the concrete and shatter the screen, you wreck the car.  You want to be able to hit the “undo” button.  It is not good to break physical items, but they can often be repaired or replaced.  There are a lot of things that are much worse to break than belongings.  It is worse to break your promises.  It is worse to break free from self-control, lose your temper, and hurt someone with your words or your fists.  It is worse when you break from self-denial and give in to self-indulgence.  It is worse when you give up on God’s way and give into the temptations of the world and life gets broken.  Life becomes a tangled mess.  Sin tangles up your life into a jumble of brokenness and denials and justifications and regret and anger and guilt and shame and despair.  Sin makes a tangled, knotted mess of life.  If only you had an undo button.

Sin makes life a tangled, knotted mess, but worse than all of that, sin brings death.  St. Paul writes in Romans 5:12 (ESV) 12 …sin came into the world through one man, and death through sin, and so death spread to all men because all sinned—[1]

Death is our great enemy.  In this Pandemic the great fear is widespread death.  We are warned repeatedly about the grave danger of Covid-19.  Even during normal times it seems like each day “experts” are coming up with something else for us to worry about in order to stay healthy and not die.

Adam broke life and turned paradise existence into a tangled, knotted, dying mess.  If only Adam had an “undo” button.

When you are young it seems there is more of a sense of immortality.  This sometimes can lead young people into risky behaviors because they think they will live forever.  The older you get the more you realize you will not live forever.  As the years go by and your hair turns gray, the more death stares you in the face.  You know it is coming.  Sin brings death, and there was sin in the world even before God gave the 10 Commandments. Romans 5:13-14 (ESV) 13 for sin indeed was in the world before the law was given, but sin is not counted where there is no law. 14 Yet death reigned from Adam to Moses, even over those whose sinning was not like the transgression of Adam, who was a type of the one who was to come.[2]

Even before Moses received the law, death reigned.  Death was king.  As Adam ignored God’s Word and ate the fruit of the tree of the knowledge of good and evil he tore a gaping hole in the fabric of life and brought sin flooding into the world; he brought death into the world.  Adam broke life and turned paradise existence into a tangled, knotted, dying mess.  If only Adam had an “undo” button.

What kind of regret and shame and guilt must Adam and Eve felt having broken life?  Adam broke the world.  He tore open the curtain that kept evil away.  He opened the floodgates of sin and death, and we still daily feel the effects.  Hospitals and cemeteries are monuments to Adam breaking the world.

Sin and death came through the first Adam who was a type for the one who is to come.  Jesus is the second Adam.  Adam broke the world by tearing the curtain and allowing evil to flood the world. Adam brings sin; sin brings death. Jesus becomes sin.  He enters into death and Hell.  He conquers all three; sin, death and Hell.  Adam broke the world.  Jesus heals the brokenness.  Jesus tears the curtain in the temple and the grace of God floods into the world from the throne of God.  Jesus undoes sin.  Jesus undoes death.  Romans 5:18 (ESV) 18 Therefore, as one trespass led to condemnation for all men, so one act of righteousness leads to justification and life for all men.[3]

Now, death still has temporary power over us, but the power is limited.  Death’s power is fleeting.  Death’s eternal reign has been broken.  Death is no longer king.  Jesus is King and brings eternal life.  Jesus is coming back to raise the dead.

Romans 5:17 (ESV) 17 If, because of one man’s trespass, death reigned through that one man, much more will those who receive the abundance of grace and the free gift of righteousness reign in life through the one man Jesus Christ.[4]

Jesus tore the curtain in the temple and flooded the world with forgiveness and life.  Romans 5:21 (ESV) 21 so that, as sin reigned in death, grace also might reign through righteousness leading to eternal life through Jesus Christ our Lord.[5]

Jesus is coming back to raise the dead.  1 Thessalonians 4:16 (ESV) 16 For the Lord himself will descend from heaven with a cry of command, with the voice of an archangel, and with the sound of the trumpet of God. And the dead in Christ will rise first.[6]